Each year, approximately 200,000 service members transition from active duty military to civilian life. For many veterans, the process can be a challenging experience—and for those seeking to enroll in college, the undertaking comes with its own set of hurdles. Sarah Payne is one such veteran who found herself needing support when making the leap from the Marine Corps to an undergraduate career.

“There’s so much information and paperwork that gets thrown at you,” Sarah says. “But then the Department of Defense only requires one week of transition classes, and they only review education benefits over a couple of afternoons. It left me feeling unprepared for some pretty critical next steps.”

Fortunately, Columbia University’s Attaining Higher Education—an online course for transitioning veterans offered on the edX platform—helped Sarah fill in all the blanks and prime herself for success.

“The course supplemented my transition classes in a very healthy way, compiling everything in one place,” she says. “Today, there are almost too many resources for veterans. It’s overwhelming! But Columbia’s course eliminates the clutter and brings together just what you need, which is especially important during an already stressful time of change.” 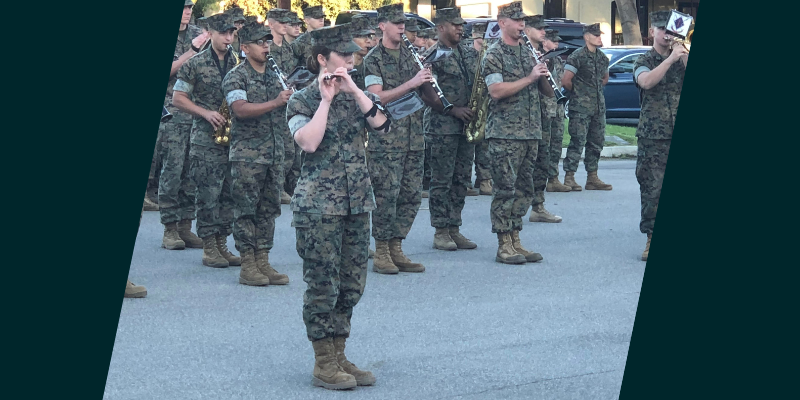 Growing up in rural Missouri as the fourth of six children—and with a father who also served in the Marine Corps—Sarah learned the value of hard work early on. While in high school, she earned good grades, played sports, worked a few part-time jobs, and even taught herself how to play the flute.

By the time Sarah graduated high school, she wasn’t sure what she wanted to study. So Sarah joined the Marines instead, just like her dad.

“I auditioned for the Marine Corps band and got in,” she says (see above photo). “For the next four years, it was very exciting to be paid to play the flute in their ensemble. But my end goal was always to go to college.”

While stationed at Base Camp Pendleton in California, Sarah was also a full-time student. As she neared the completion of her bachelor’s degree, the education center on base recommended Sarah for the Marine Corps Leadership Scholars Program. She was soon connected with Beth Morgan, the program’s former director. Morgan now leads higher education transition and partnerships at Columbia University—and she’s also one of the experts behind the development of the Attaining Higher Education course.

“Beth suggested I take her course to learn all my options for applying for financial aid at an Ivy League school—somewhere I always dreamed of going,” Sarah says. “I knew that starting my bachelor’s degree over at a top school could eventually help me get into the graduate program of my choice. And if I found out how to get a full undergraduate ride through the edX course—which I eventually did!—then I could save my GI Bill benefits to pay for my master’s and/or law school instead.”

Not only was the flexible, self-paced nature of Columbia’s online course a perfect fit for Sarah’s busy schedule, she also found the material to be comprehensive in all the ways she could fund her future.

“The experience was pivotal for me,” she says. “I learned all the intricate differences between the benefits of the GI Bill, FAFSA, disabled veteran options, and direct financial aid from each school. There’s a lot to learn, but the course takes you through all the pros and cons of each so you can determine which is best for your situation—whether you have kids, low income, etc. There’s also a handy interactive map that lets you click to see how each school operates their financial aid programs.”

Beyond financial advice, the course helps military personnel put their best foot forward in the applications and interviews. Sarah particularly appreciated its guidance on essay writing.

“Service members tend to avoid being emotionally vulnerable in our personal statements,” she says. “Instead, we use an application’s essay section as a place to quantify our accomplishments. But the course says that colleges want to see your unique personality and really get to know who you are in that space. If I had not taken the course, my personal statement would have read a lot like a resume—and that’s definitely not what schools want.”

Taking this lesson and many others to heart, Sarah got up the courage to apply to 10 Ivy League schools in all—and was ultimately accepted into eight of them.

“Well, ok, I had to redact the two I hadn’t heard from, in order to accept the full ride from the school I chose,” she laughs. “So I tell myself they would’ve accepted me too, but I guess we’ll never know. And that’s fine by me!” 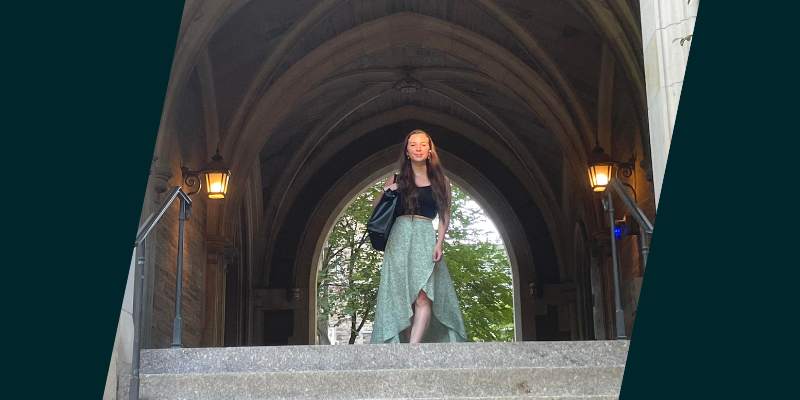 Flash forward a year, and Sarah is now a sophomore at Princeton (see above photo), ranked number one out of 443 national universities by U.S. News and World Report for the current academic year. She has begun steering her undergraduate classes toward Pre-Law, intent on using her GI Bill benefit for Yale or Harvard law school after she graduates.

“I’d love to work on prison and education reform once I’m firmly established,” she says. “I used to volunteer at a literacy center near Camp Pendleton, teaching mostly immigrant adults how to read in English. In training to be a tutor there, I learned that two-thirds of America’s incarcerated population is functionally illiterate. The relationship between education, poverty, and prison within that statistic really disturbs me. That’s something I want to use my degrees for, to help society change.”

Thanks to Columbia’s course, Sarah’s long-term goals are within closer reach than ever before. She continues to reap the short-term benefits, too.

“The course really emphasizes being organized and pacing yourself,” she says. “Applying to college is a huge endeavor, so they encourage you to map out your plan and plot it all on a calendar. I still use those skills at Princeton today, and I’m sure for years to come. But really, any veteran is going to be well-educated and prepared for college with this resource. After taking the edX course, no veteran’s needs should remain unmet, financial or otherwise.”