Last fall, that was the can-do spirit Alix Friedman had upon enrolling in the Berkeley Coding Boot Camp in hopes of pivoting her career into tech. For nearly a decade since graduating high school, she had worked full-time at a retail garden center in the San Francisco Bay Area, eventually moving into management for two of the chain’s locations. She had been contemplating a change for a while, but the pandemic ultimately set her thoughts into motion.

“It was like needing to rip off a Band-Aid,” Alix says. “I was hesitant about the idea of transitioning jobs, because it meant leaving a comfortable management position that I really loved. But when COVID hit and things changed in the workplace, I knew I needed a fresh start. I had outgrown the garden center and hit the top of what was available to me.”

Alix’s parents had both studied at University of California, Berkeley, so that’s where she started looking for learning opportunities and discovered the range of boot camps available.

“I knew the coding program was going to be pretty intensive,” Alix says, “but while I was still exploring my options, I spotted information about all the boot camp’s career services. When I learned there are tutors you can also work with twice a week, it just sounded like the Berkeley boot camp offered more assistance than others I researched. If I was going to leave my job, I needed a program with a comprehensive support network attached to it to set myself up for success.”

Alix’s decision to commit to the full-time coding boot camp paid off. By taking full advantage of our Career Engagement Network (CEN), Alix was able to break into a new industry as a tech support associate with global digital consulting company Infosys—one of hundreds of employers that we work with to help students in our partner programs chart clear education-to-career pathways. 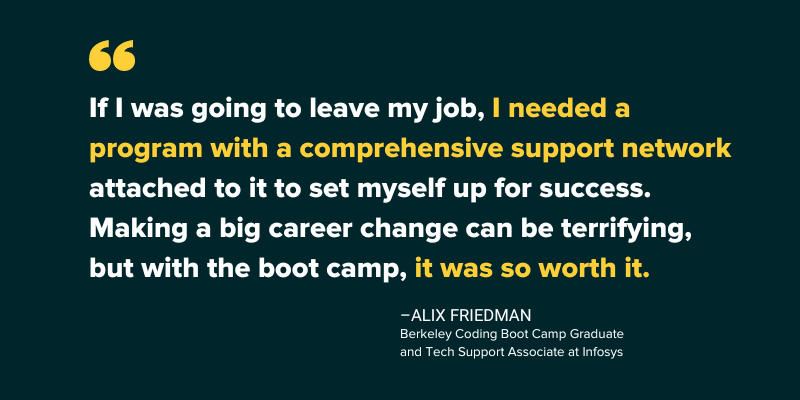 The Power of Networking

As Alix expected, the coding boot camp moved at a swift pace. The first two days were dedicated to HTML, followed quickly by CSS, Javascript, MySQL, REACT, MongoDB, and other programming languages and concepts, each unit building upon the next. Throughout her learning experience, Alix found the boot camp’s intentional community-building to be just as helpful as all the project-based instruction and tutoring support.

“One of the key things we learned was how to troubleshoot,” she recalls. “We learned how to write code to test our code—and then write more code to test each others’ code! We were also encouraged to form our own student chat group and use it to ask each other questions. That was huge, because sometimes I’d be working late on a project, and I’d reach out in the channel and someone else was inevitably working on the same assignment. So we’d hop into a voice chat and take a look at the code and figure it out together. We were helping and cheering each other on constantly.”

The instructor also invited several guests to speak to the cohort, many of whom were former boot camp students now in successful tech roles. In learning about their various career journeys, Alix not only gained valuable advice for her own, she also used these interactions to become more confident in her networking skills.

“Leading up to the last day of class, our instructor walked us through the CEN and encouraged us to sign up for as many different information seminars and recruiting webinars as possible,” Alix says. “And that’s exactly what I did, along with registering for the resume workshop. Once I updated my LinkedIn profile and started replying to job listings with my resume, I began getting requests for interviews pretty quickly.”

A month after graduating the boot camp, Alix fatefully registered for a CEN webinar hosted by Jack McNicholas, an associate recruiting team lead for Infosys.

“When Jack introduced himself, one of the first things he did was invite us to connect with him on LinkedIn,” Alix recalls. “So I immediately sent him a message saying, ‘Hi Jack, I’m in your webinar right now and I’d love to learn more.’ And that’s how we started chatting. At that point, I had a couple of other job offers, but Jack explained there were a lot of growth opportunities at Infosys. I had hit that ceiling at the garden center, so I was very excited to hear that.”

Flash forward to today, where Alix is finishing up Infosys’s two-month paid tech training and onboarding program, which the company offers to all of its new tech hires. To date, Infosys has hired over 100 graduates from our university partner boot camps, and Alix is proud to be one of them.

“The training has been very beneficial,” Alix says. “It feels like a pretty seamless transition from the boot camp, but part of that is because the boot camp taught me how to learn fast and remain calm in the face of information overload. I’m able to keep telling myself, ‘I can do this because I’ve already done this in the boot camp.’

Though Alix isn’t yet sure which projects or clients she’ll be working with upon completing her training, she’s already made a few new friends thanks to the CEN's ever-growing alumni network.

“Quite a few people in my Infosys onboarding group have come from an edX boot camp—not just Berkeley but from all over the country,” she says. “So we all immediately connected and have begun helping each other out, having conversations and asking questions, just like in the boot camp. We’ve formed our own little network, and that’s going to go a long way in helping me feel even more ready for this new job.”

Opening Up All the Doors

When asked where she’d like her tech career to grow in the future, Alix says she’s just excited to jump in with Infosys and get going. But she points to tech project management as one possible specialization further down the road.

“As part of the Infosys training, there are classes you can take on your own time, and one of them I did was called ‘Agile and DevOps,’” she says. “It’s all about how to streamline your work processes to make everything flow better. Within that area, there’s a role called scrum master that I could see myself being a good fit for. I have almost 10 years of management experience, and a scrum master helps technology teams be more efficient, so a lot of those same skills could transfer.”

For now, Alix is glad that Infosys recognizes the talents she brings to the table with her mix of prior professional experience and boot camp learnings.

“From someone who’s done a lot of hiring myself over the years, I’d like to thank Infosys for taking a chance on me,” she says. “What they’re doing is so important—as far as investing in people who may not have a college degree but who’ve decided to switch careers and take a boot camp. Making a big career change can be terrifying, but with the boot camp, it was so worth it. It opens up all the doors!”