Kyoto University previously announced a competition for learners in their Evolution of the Human Sociality: A Quest for the Origin of Our Social Behavior course. Read on to learn about the winners of the competition and their trip to Japan.

As an additional part of Kyoto University’s Evolution of the Human Sociality: A Quest for the Origin of Our Social Behavior course, lectured by Kyoto University President Juichi Yamagiwa, the course team held a competition for learners to win an all expenses paid trip to Kyoto University. As part of the competition, learners were asked to submit a research proposal as a coursework assignment. Two winners, Rachel Ahn and Gaspard van Hamme, were selected and joined President Yamagiwa, faculty members and students of primatology study at the university on their winner’s trip.

The course assignment required learners to come up with their own idea about a feature that is unique to humans, in comparison to other primates. They were asked to show detailed examples and explain why they think this feature has evolved in human evolution history. Learners’ research proposals were thoroughly evaluated and judged on how unique and creative their research approach was, as well as originality of their idea. 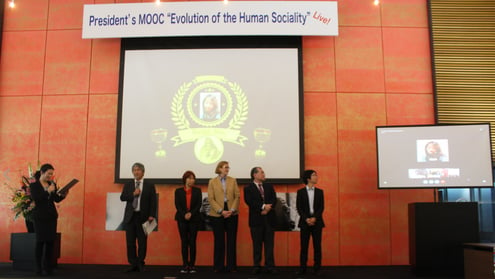 After carefully reviewing all of the candidates submissions, four finalists were chosen to give their final presentation via online at the “President’s MOOC Evolution of the Human Sociality Live!” event conducted at Yamauchi Hall at Kyoto University. The whole event was streamed online as a special feature of the course. President Yamagiwa and other judges, including edX Vice President of Education Services, Kathy Pugh, and Professor Satoshi Hirata, from the Wildlife Research Center of Kyoto University, announced the winners at the end of the event.

Rachel’s proposal pointed out that the history of clothing (to wear clothes and cover their bodies) is only seen in the human species and also made assumptions with four possible reasoning; protection, attention, identification, and modesty. Her well-prepared presentation and the uniqueness of her idea caught the attention of President Yamagiwa and other judges. Gaspard made a good argument about humans blushing behavior as a way of communication, which may have derived from the sociality of feeling embarrassed.

During their stay, the winners presented their proposals at the 60th Primates Conference held at the Japan Monkey Centre and exchanged opinions and conversations with faculty and students of primatology study.

One of the winners, Rachel Ahn, a high school student from South Korea​ commented,

I didn’t have a specific interest in primates before the course, but afterwards, it is really quite interesting and this trip has broadened my understanding as well. And, I never realized before that there were many different social structures within primates and how complex they can be.

The other winner, Gaspard van Hamme, from Belgium working as a nature guide in South Africa, reflected his experience as,

The Primate Research Institute was quite amazing because I got to see some world-leading experiments that I just saw on TV before and I never imagined before I would get a chance to see it.

Overall, this was a great experience for both the learners and Kyoto University.

Learn more about Kyoto University and their upcoming courses.